In the world of luxury watches, Patek Philippe is the undisputable leader. And not just in modern fine watches, but more importantly, in the vintage space too. In fact, no other brand comes close to commanding the prices vintage Patek Philippe watches do. Prized for their beauty, unmatched quality, and rich heritage, vintage Patek watches also offer collectors another key feature: a great investment. Let’s dig into some popular vintage Patek Philippe collections to discover what they’re all about.

Possibly the most famous of Patek Phillipe models, the Calatrava made its debut in 1932. Inspired by the Bauhaus principle where form follows function, the Calatrava is an exemplary illustration of minimalistic elegance. The Calatrava watch was named after the famed Patek Philippe Calatrava Cross—the official emblem of the company.

The automatic Calatrava ref. 2584 seen here is from the 1950s and its 36mm case is presented on a black leather strap. It’s worth noting that the ref. 2584 was one of Patek’s earliest automatic movement watches. On the dial we see slender gold hands, gold stick hour markers, and the small seconds subdial at 6 o’clock.

On the other hand, the manual-wound Calatrava ref. 3520-10 from the 1980s does not include the small seconds indicator. It does however, also have the slim center hands along with the stick indexes. But, the most distinguishing feature of the Calatrava ref. 3520-10—aside from its gold mesh bracelet—is the intricate “Clous de Paris” or “hobnail” bezel on its 32mm case.

The manual-wound Calatrava ref. 3919/005 from the 1990s also has the similar bezel on its 33.5mm case, yet its gold mesh bracelet features a more robust pattern. Moreover, on the dial, there’s the small seconds register, in addition to the Roman numerals.

While these three vintage Patek Philippe watches have their own distinct details, they are instantly recognizable as part of the Calatrava family.

The ref. 1450, often nicknamed the”Top Hat”, is a vintage Patek Philippe watch that was in production from the 1940s until the late 1960s. It’s characterized by its hooded lugs and dramatic curved acrylic crystal protecting the face of the watch. While there are rose gold and platinum examples of the Patek ref. 1450 “Top Hat”, this particular model from 1955 is in 18k yellow gold with a leather strap. The 25mm x 29.5mm case houses a white dial with yellow gold indexes and hands. You’ll notice on the dial the hour markers are actually a mix of sticks and dots. Furthermore, the small seconds indicator sits at 6 o’clock, just under the center hands.

Powering the vintage Patek ref. 1450 is the famous Caliber 9-90. This manual-wound mechanical movement that powers the pair of center hands and small seconds indicator includes a lever escapement and 18 jewels. Additionally, it operates at 19,800 beats per hour. Patek Philippe produced these rectangular shaped calibers from the mid-1930s until the late 1960s.

Although the Patek Philippe ref. 1450 “Top Hat” was originally created for men, today, it’s certainly considered a unisex watch. A stunning and rare example of vintage Patek Philippe watches from the mid 20th century, the ref. 1450 is both attractive and collectible.

In 1968, Patek Philippe launched the Ellipse watch featuring a distinct rounded rectangular case and minimal dial. This time, Patek used the Golden Section, aka the Golden Ratio, to design this particular model. The ultra-thin Ellipse was met with great enthusiasm and continues to be a part of the current Patek Philippe offering. Here we have two vintage manual-wound Patek Philippe Ellipse timepieces in two different shades of 18k gold.

The Ellipse ref. 3546 sports its distinctive linear oval case in 18k white gold, which houses a white dial and black Roman numerals. Especially interesting with this model from 1972 is its custom-made 18k white gold bracelet. What’s more, if you flip the watch around, you can see the manual mechanical movement ticking within via the sapphire crystal caseback.

The Ellipse ref. 3748 from 1980 has, of course, the same case shape, yet its construction is in 18k yellow gold. Also, the blue dial hosts matching 18k yellow gold hands and simple stick indexes. Rounding out the look of the Patek watch is the black leather strap and 18k gold tang buckle. Magnificently minimal and oh-so-vintage Patek Philippe.

In addition to the above timepieces, we also have here two very rare vintage Patek Philippe watches to show—the ref. 1593 and the ref. 425.

The vintage Patek Philippe ref. 1593 is sometimes referred to as the “Hour Glass” due to the shape of its case sides. It was first launched in 1944 and was in production for 20 years. It was primarily available in yellow gold, but there were also some rose gold and platinum versions too. Here we see an 18k rose gold model of the Patek Philippe ref. 1593. On the dial is an interesting mix of numerals at 3, 9, and 12 o’clock, a dot at 6 o’clock, and triangular indexes on the remaining spaces. Also on the dial is the small seconds indicator. But most importantly, is the Hausmann & Co. signature, making this specific vintage Patek Philippe especially rare.

The other vintage Patek we have here is the rectangular ref. 425. Sometimes nicknamed the “Tegolino” (a famous Italian rectangular cake), the Patek Philippe ref. 425 production started in the 1930s. This particular version of the ref. 425 “Tegolino” is exceptionally rare thanks to its platinum construction and diamond-set dial. A closer look at the dial reveals 11 white diamonds—a mix of brilliant-cut and baguette-cut ones. The only hour without a diamond is 6 o’clock to leave room for the small-seconds subdial. 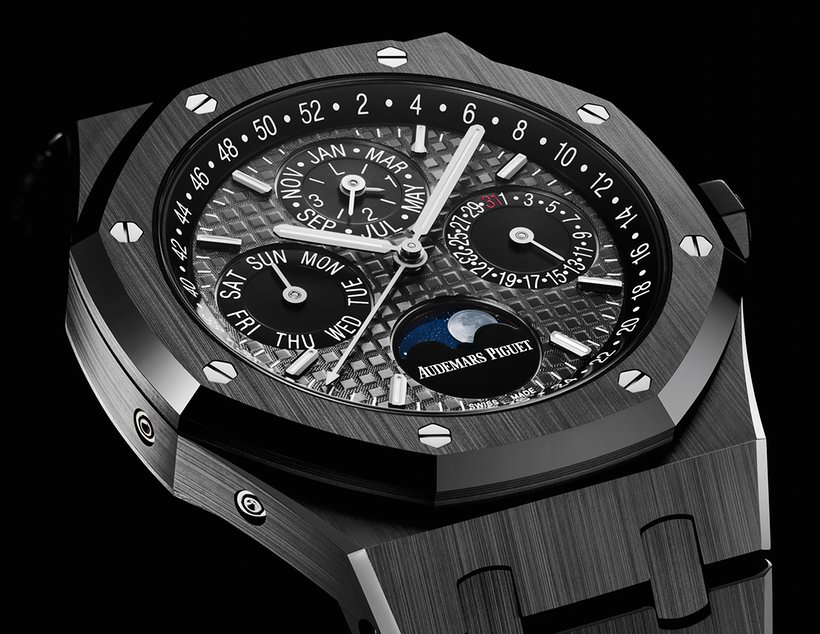 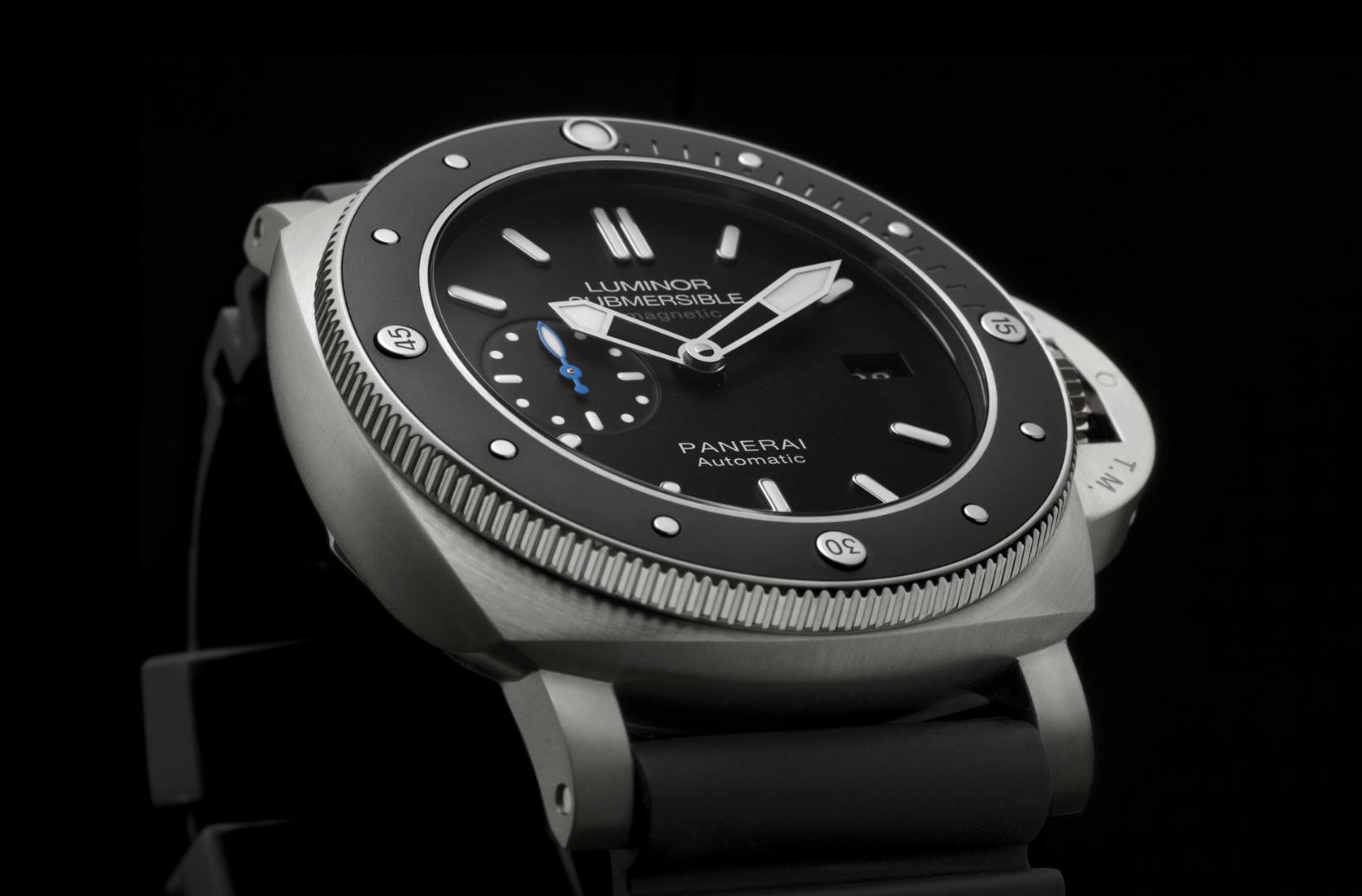