Germany is well known for some of the world's most notarized watch brands ever manufactured. With brands such as Montblanc, Sinn and NOMOS, Germany does not take a backseat to the powerhouses coming out of Switzerland. One brand, in particular, has separated itself to the top of German luxury timepieces, this brand is A. Lange & Sohne. The company was founded in 1845 by Ferdinand Adolph Lange in Glashutte, Germany. In 1948 operations of the watch brand ceased after World War 2 due to it being nationalized after the occupation of the Soviet Union. It wasn't until 1990 that the company was re-registered by Walter Lange, the grandson of Ferdinand Adolph Lange. The company has since transferred ownership several times and is currently under the Richemont family. The A. Lange & Sohne Lange 1 is one of their most popular models. We here at Gray and Sons will give you an in-depth tour of the servicing of this elegant timepiece. 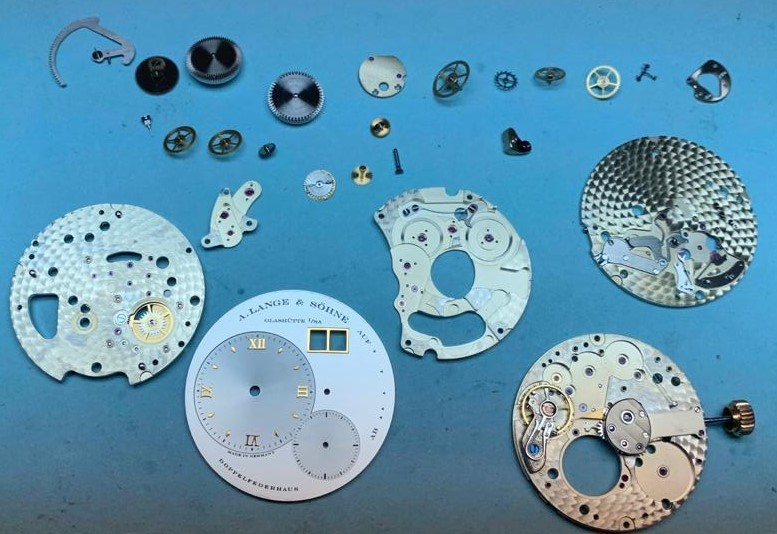 Lange 1 Watch Repair Near Me

Gray and Sons delivers the best quality in service and quality to preserve and maintain the proper working conditions of all A. Lange & Sohne models including this Lange 1 we recently received in our service department. Factory specifications indicate you should routinely have your A. Lange & Sohne serviced every 3-4 years taking into consideration the owners operating habits. This Lange 1, with reference 191.032, has an elegant 38.5 MM case measurement in 18K pink gold. The watch comes with a power reserve indicator along the 3 o'clock position as well as a second sub dial at the 5 o'clock position. The watch date indicator is located near the 1 o'clock position by two window displays. Our in-house watchmakers and polishers have over 150 years of combined experience and have immense knowledge regarding all A. Lange & Sohne models. To start the process, our master watchmaker carefully disassembles the case, separating the movement from the case carefully. The case is then sent to our polisher for case refinishing to restore the elegant mirror shine to this 18k pink gold case and buckle. Now with the movement carefully out of the watch case, our master watchmaker begins disassembling the movement components piece by piece. During which they are meticulously inspecting each part for wear or damage to properly ensure the lifespan of the service. 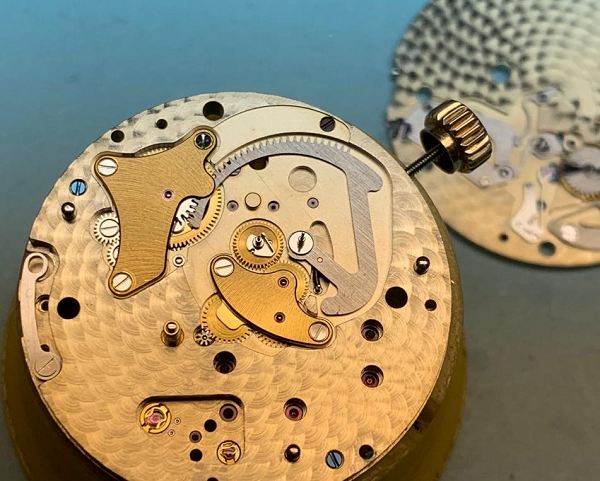 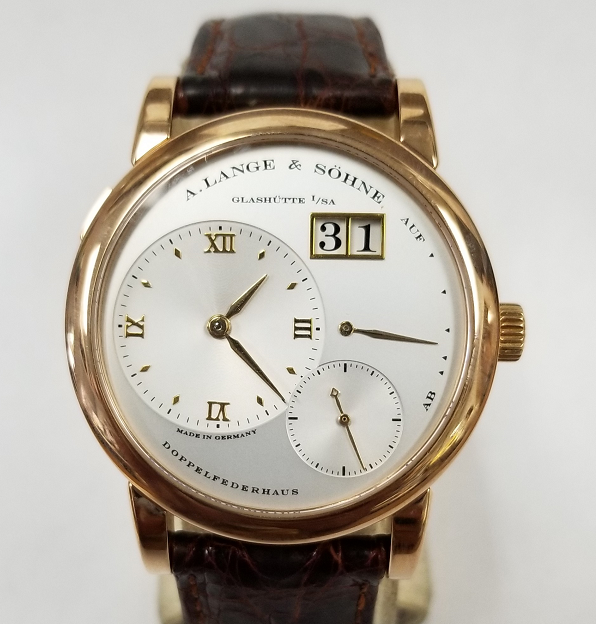 During the disassembly, our watchmaker makes any necessary repairs or adjustments to the movement before putting all the components into our ultrasonic cleaner. Once completely torn down to the last screw and bridge, the movement plates and wheels are gently placed into our ultrasonic cleaner. Vibration is then used through rotating fixtures housing the movement components to clean and dissolve old coagulated oil and dirt in three different solutions. This process is essential to return the parts to their original clean state. The movement parts are dried to ensure no residue remains and fresh oil can begin to be applied. Our master watchmaker begins assembly by carefully putting together each component in their appropriate order while checking pivot end shakes as well as tolerance freedom of the wheels and gears for accurate function. During reassembly of this A. Lange & Sohne Lang 1, the watchmaker uses four different synthetic oils to lubricate each point of friction and rotation through the gears and pinions. This process mirrored to the factory specifications to this watch. Movement is then tested for timing accuracy and amplitude on our testing equipment to ensure all proper adjustments were made during the reassembly process. With a freshly clean and regulated movement, it is time to case the movement into its beautifully refinished case where it will again be checked for functionality and display once all put together. The Lange 1 is water tested to its suggested depths to ensure water resistance. Watch will then be put on time and quality controlled over the course of 1-2 weeks to observe its power reserve and automatic system. The timepiece is placed on our 4 RPM watch winders to simulate daily use by a wearer. Once timekeeping is kept during the manufacturer's suggested run time, the watch is released to the client to enjoy as new. Gray and Sons is proud to be your choice for A. Lange & Sohne services and repairs to return your timepiece to its original working condition.

Request an Easy Ship Box
Once you receive the box and send your watch, one of our Master Watchmakers will evaluate it and contact you with a free estimate. If you approve of the estimate we will proceed with the repair, which generally takes 3-6 weeks.
If you wish to repair at a different time we will ship the watch back to you at no cost to you.