The early 90's was a pivotal time for Audemars Piguet, as they sought to enhance their already popular Royal Oak model. Emmanuel Gueit was given the monumental task of designing the new version of the Royal Oak. The focus for Gueit was to design a version that would appeal to a younger crowd, he believed to achieve this task he would have to give the Royal Oak a more robust and thicker presentation. In 1993 Audemars Piguet introduced its Offshore 25721ST. The first 100 watches did not bear the name Offshore on the case due to what many believed to be a mistake by Audemars Piguet to alter their thin Royal Oak design, especially the designer himself Gerald Genta. The Offshore, which was given the name of "The Beast", later was responsible for a large portion of the companies sales. Over the years the Royal Oak Offshore has changed faces and design making it a much desirable timepiece to have in your collection. Gray and Sons has taken the upmost pride in delivering this gorgeous watches to the wrist of our clients. 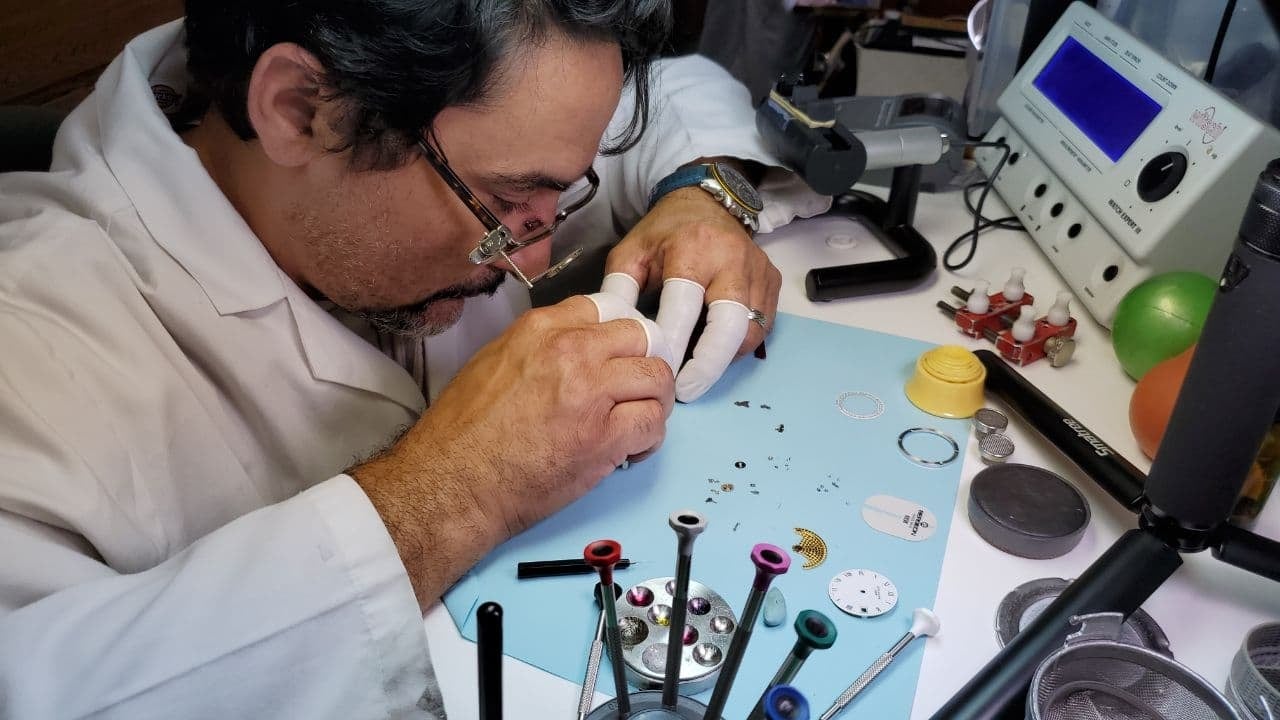 At Gray and Sons we take in all Audemars Piguet Models including this 26165IO.OO.A002CA.01 we just has in our work shop for full service. Let's take a look at Gray and Sons procedures in returning these timepieces to their original factory specifications. We received this Royal Oak Offshore Survivor for service due to poor time keeping. Factory specifications indicate you should routinely have your Audemars Piguet serviced every 3-4 years taking into consideration the owners operating habits. This Offshore has a 100 meter dive capability with a thick 42 MM case measurement. The timepiece has a 50 hour power reserve with a date indicator at the 3 o'clock position. This Audemars Piguet has a 26165IO.OO.A002CA.01 reference that comes with a Mega Tapisserie pattern on the dial along with white gold hour markers. It is a limited edition piece with a count of a 1000. Our in-house watchmakers and polishers with over 150 years of combined experience were up to the task of servicing this extravagant timepiece. To begin the process, our master watchmaker carefully disassembles the case to separate the movement from the container housing all of the casing components. The case is then sent to our polisher for cleaning to remove any build up of dirt. Now with the movement carefully out of the watch case, our master watchmaker begins disassembling the the components piece by piece. During which they are meticulously inspecting each part for wear or damage to properly ensure the lifespan of the service. 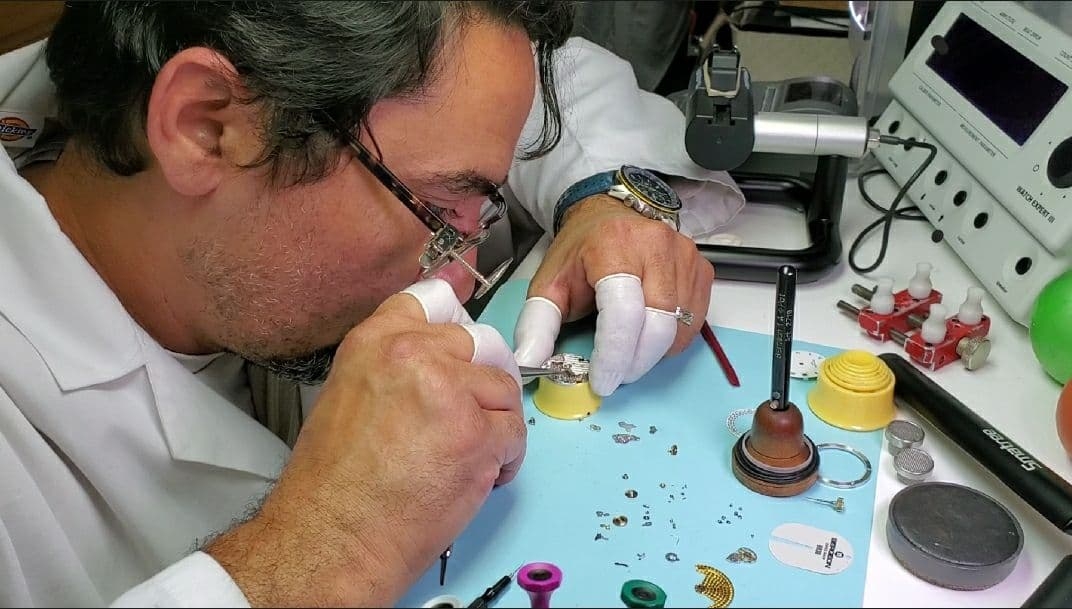 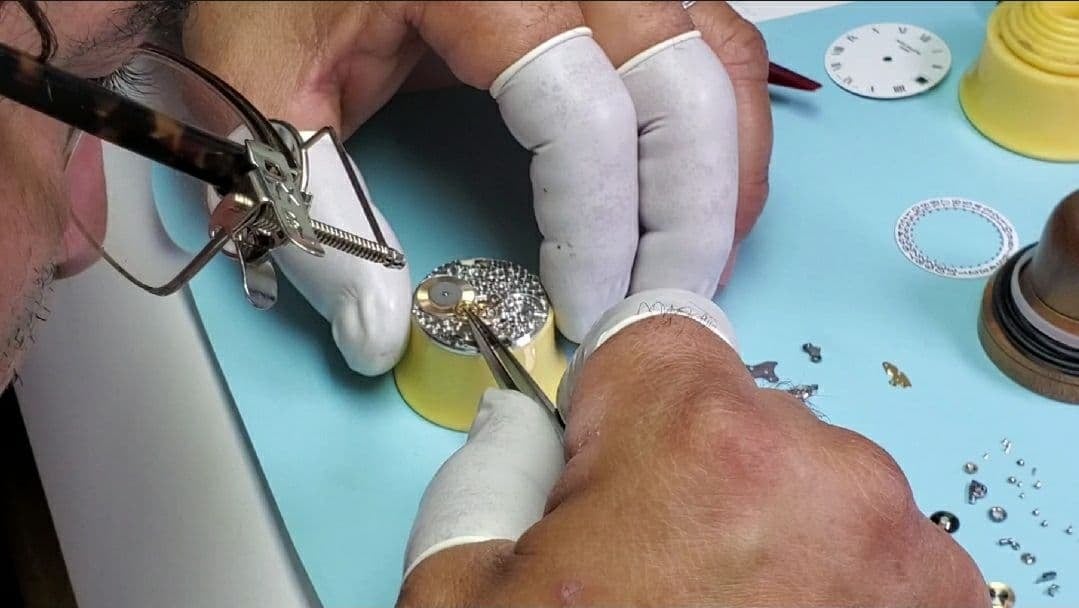 Once completely torn down to the last screw, the movement is gently placed into our ultrasonic cleaner which will use vibration in three different solutions. During the process, old coagulated oil is dissolved and components are cleaned and returned to their original clean state. Once the movement parts are dried our master watchmaker begins assembly by carefully putting together each component in their appropriate order while checking pivot end shakes and freedom for accurate function. During reassembly of the Royal Oak Offshore, the watchmaker uses four different synthetic oils to lubricate each point of friction and rotation through factory specifications. Movement is then tested for timing accuracy and amplitude to ensure all proper adjustments were made during the reassemble process. With a freshly clean and regulated movement, it is time to return the movement into its beautiful case where it will again be checked for functionality and display. The Audemars Piguet is water tested to its suggested depths to ensure water resistance. Watch will then be put on time and quality controlled over the course of 1-2 weeks to observe its power reserve and automatic system. Gray and Sons is proud to be your choice for Audemars Piguet services and repairs to return your timepiece to its original working condition.