Gerd R. Lang, founder of Chronoswiss in 1983, was known as the “man with the tick”. He began working with the now recognized Tag Heuer in Switzerland. Lang was able to experience the birth of the first-ever automatic chronograph watch released by Breitling. This rose such a passion for chrono watches inside of him that today he owns a collection of more than seven hundred chronograph watches.

Sixteen years later, Tag Heuer closed their German doors and so Lang decided it was time to take a risk and go his own way. He originally founded Chronoswiss in Munich, Germany but is able to wear the “Swiss Made” label because they put the watches together and run a final test in Switzerland.

Many manufacturers use ETA movements on their watches as if they were their own. Chronoswiss uses these movements and tweaks them to their standards, unlike other companies. You can find it engraved on this part of the moment we repaired from a Chronoswiss Opus Chronograph. 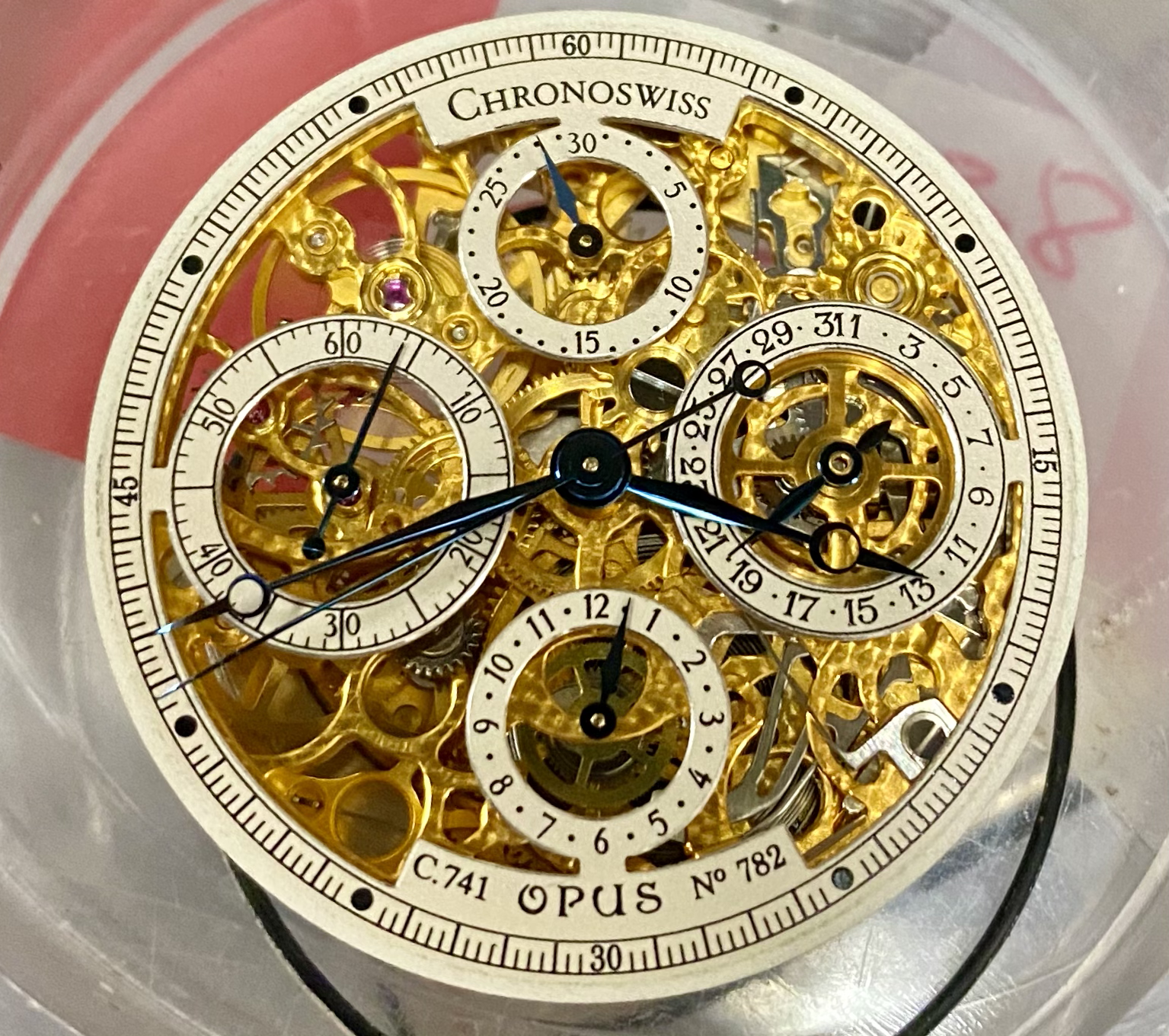 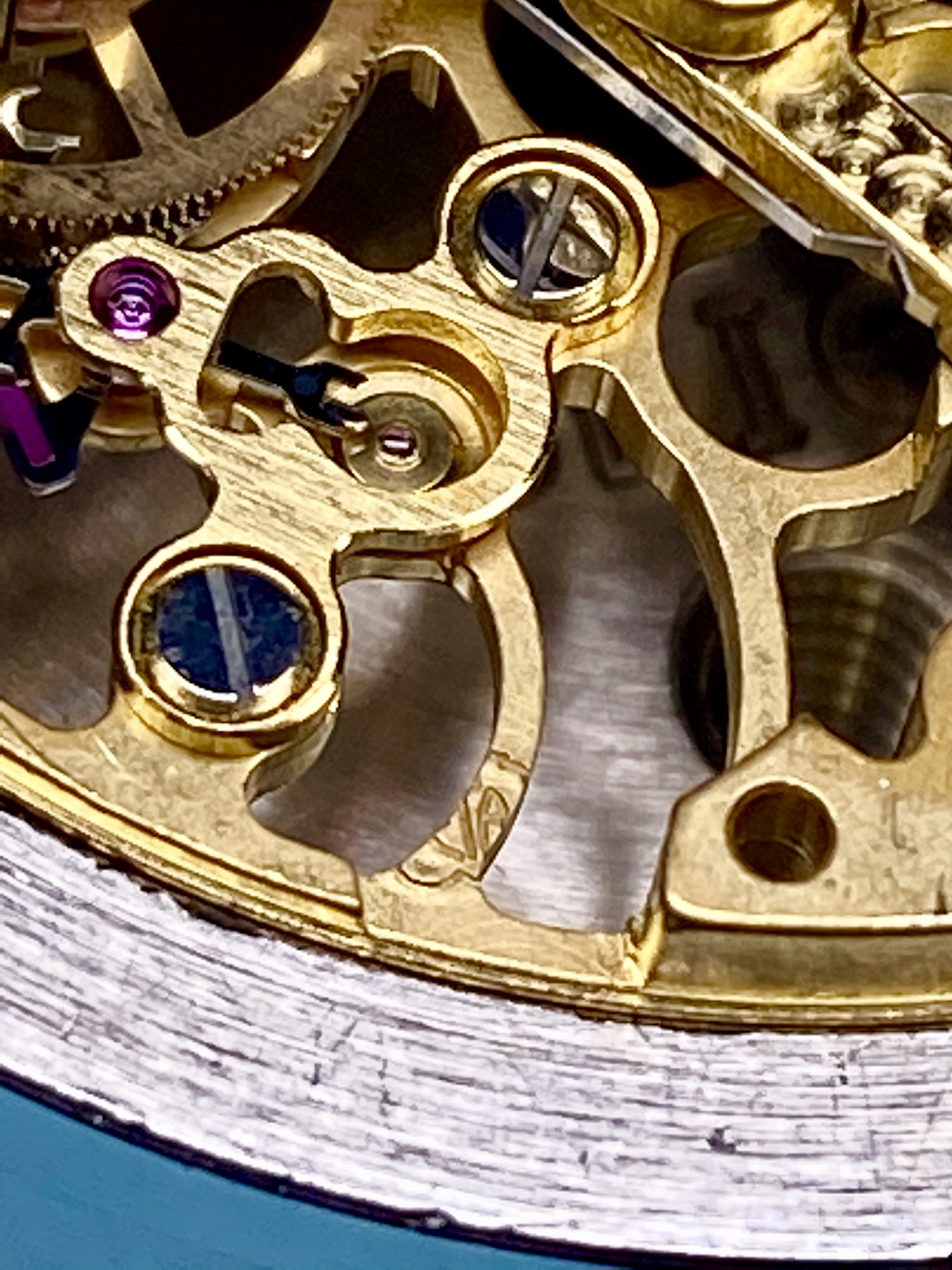 Lang released two other timepieces at the perfect moment; the Tachoscope, released during Audi’s 100th anniversary, and the Regulator Rallye Limited Edition bringing the car world and the watch world together. Chronoswiss has become a highly known name amongst collectors, sponsoring many classic car rallies. Gerd R. Lang has contributed significantly to the renaissance of mechanical watches.

Mark from New York was in Miami for a short stay and came into our boutique. He brought his Chronoswiss Skeleton Opus saying it was losing time and at times coming to a complete stop. It turns out the watch had never been serviced and he didn’t know because it was his law school graduation gift handed down by his father.

We explained how it was important to overhaul and detail timepieces every 3-5 years, depending on the manufacturer and wear of the watch. He then understood it was urgent for us to take in the watch and service it. 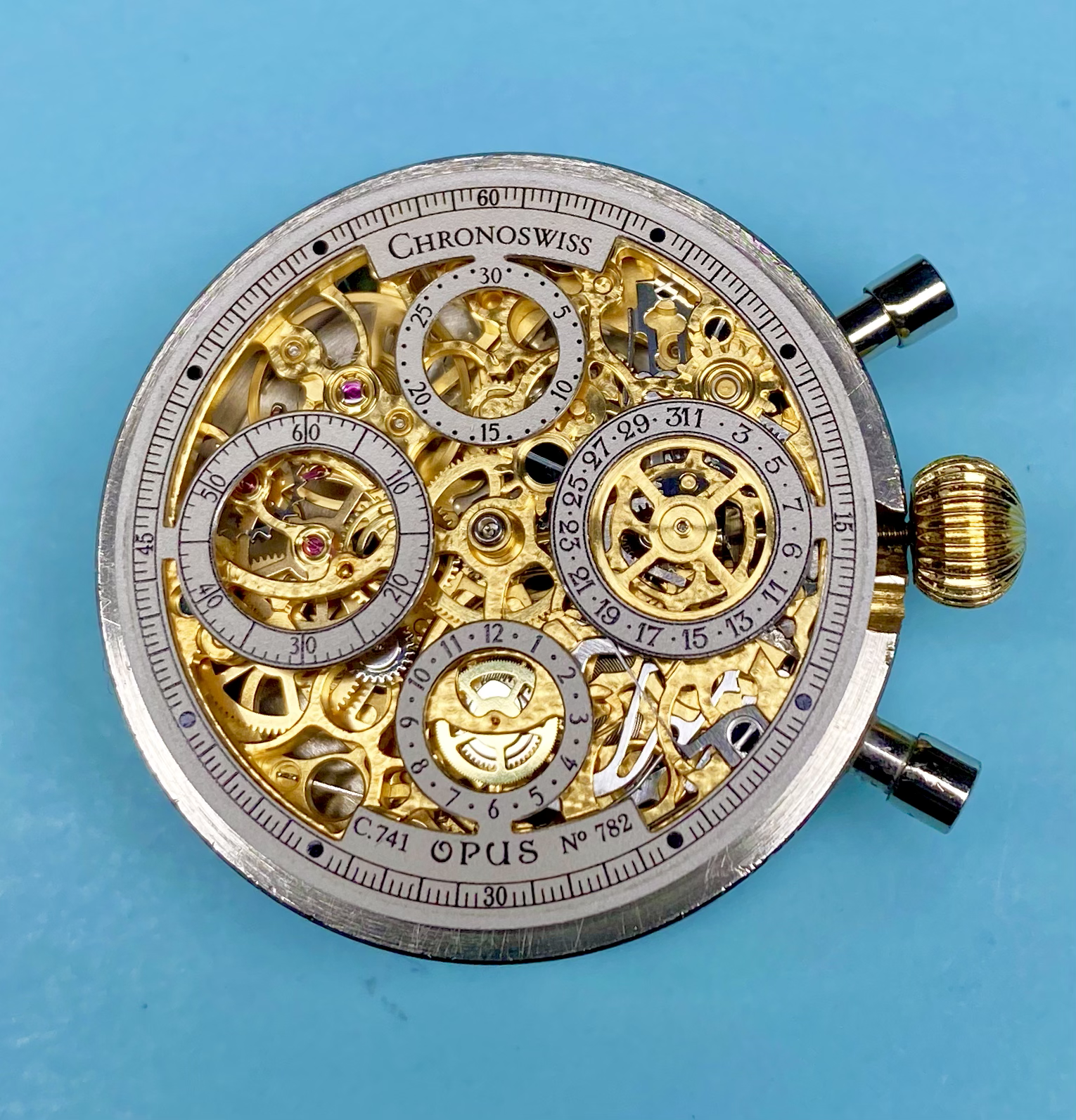 As part of the exclusive Gray and Sons experience, we sent him pictures of his entire watch repair. The first update we sent him contained his disassembled watch. He could see the dried up oils and dirt accumulated throughout the watch’s lifetime. He was so amazed to see how just like a collectible car needed maintenance, this timepiece needed its own loving watch service. The following email he received from us was his movement; shiny and spotless after being cleaned by our master watchmakers. They then re-lubricated it and replaced parts that had been worn out which included the mainspring.

After testing the watch to make sure it was water-resistant and had the right amplitude. We sent a final update of his watch fully reassembled. We suggested, to make the watch look brand new, to get a new tang strap for it, but there was sentimental value attached to it still. We kept the strap and a very happy Mark joined our Gray and Sons family.

We are Gray & Sons

At Gray and Sons we take pride in our watchmaking skills. Our overhaul and detail service is done in a very thorough manner. There are a series of steps that need to be followed in order to a watch repair like the Chronoswiss Skeleton Opus Chronograph - a very complicated watch.

Our Process of Overhaul and Detail

The Chronoswiss Opus Chronograph watch repair is started by our master watchmakers disassembling the watch to its bare components. Then, they proceed to polish the case and bracelet of the watch, making it look like it just left the factory. 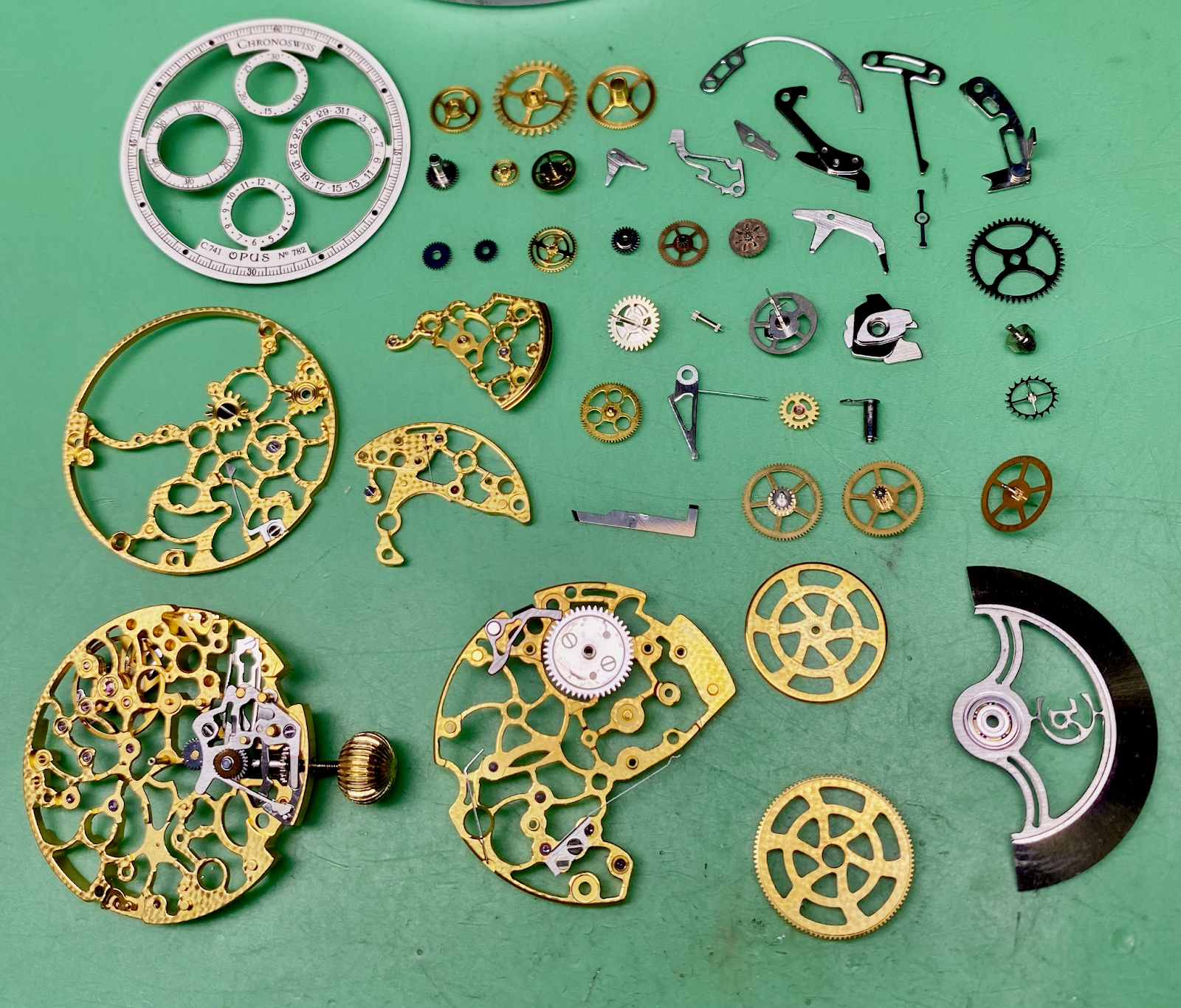 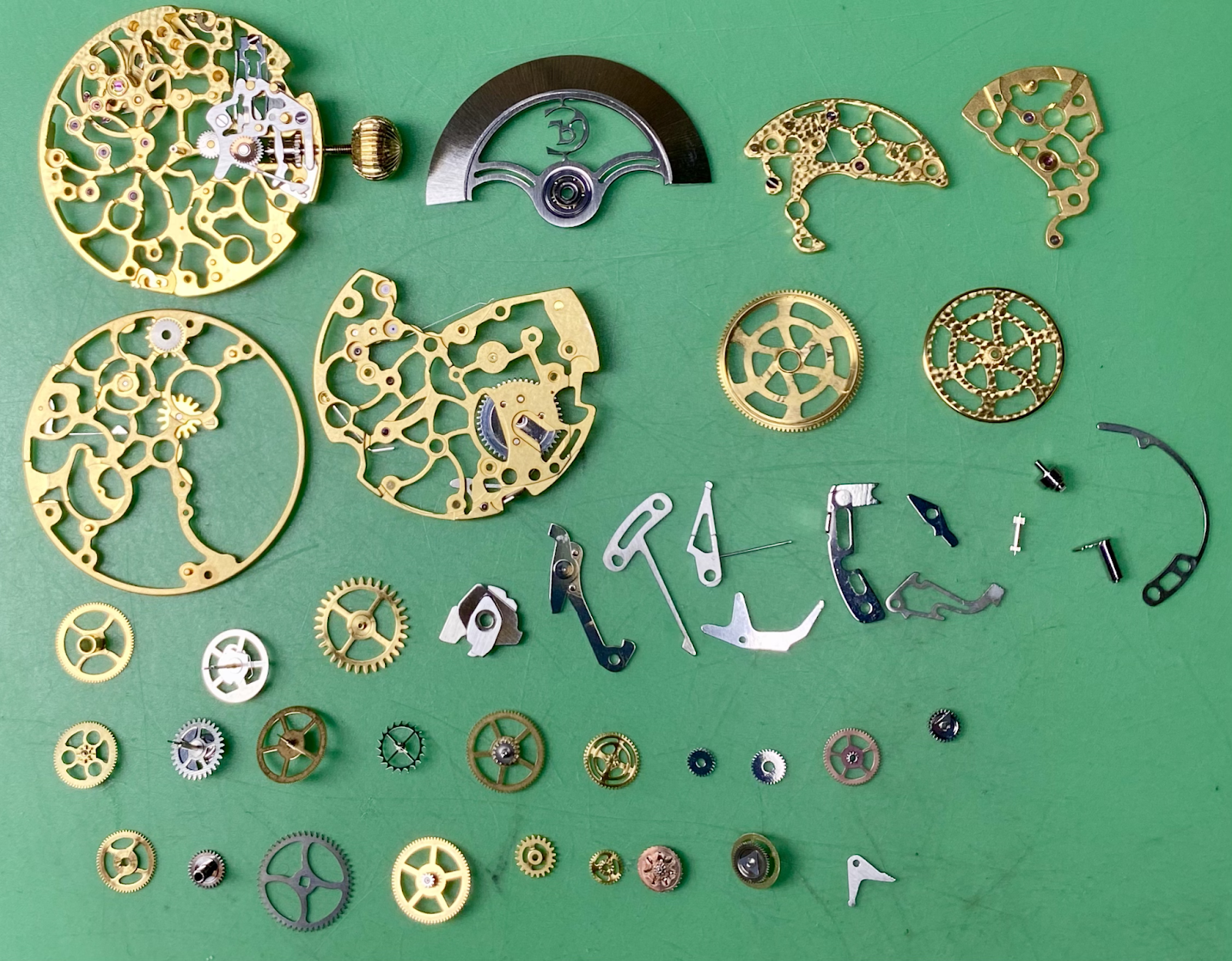 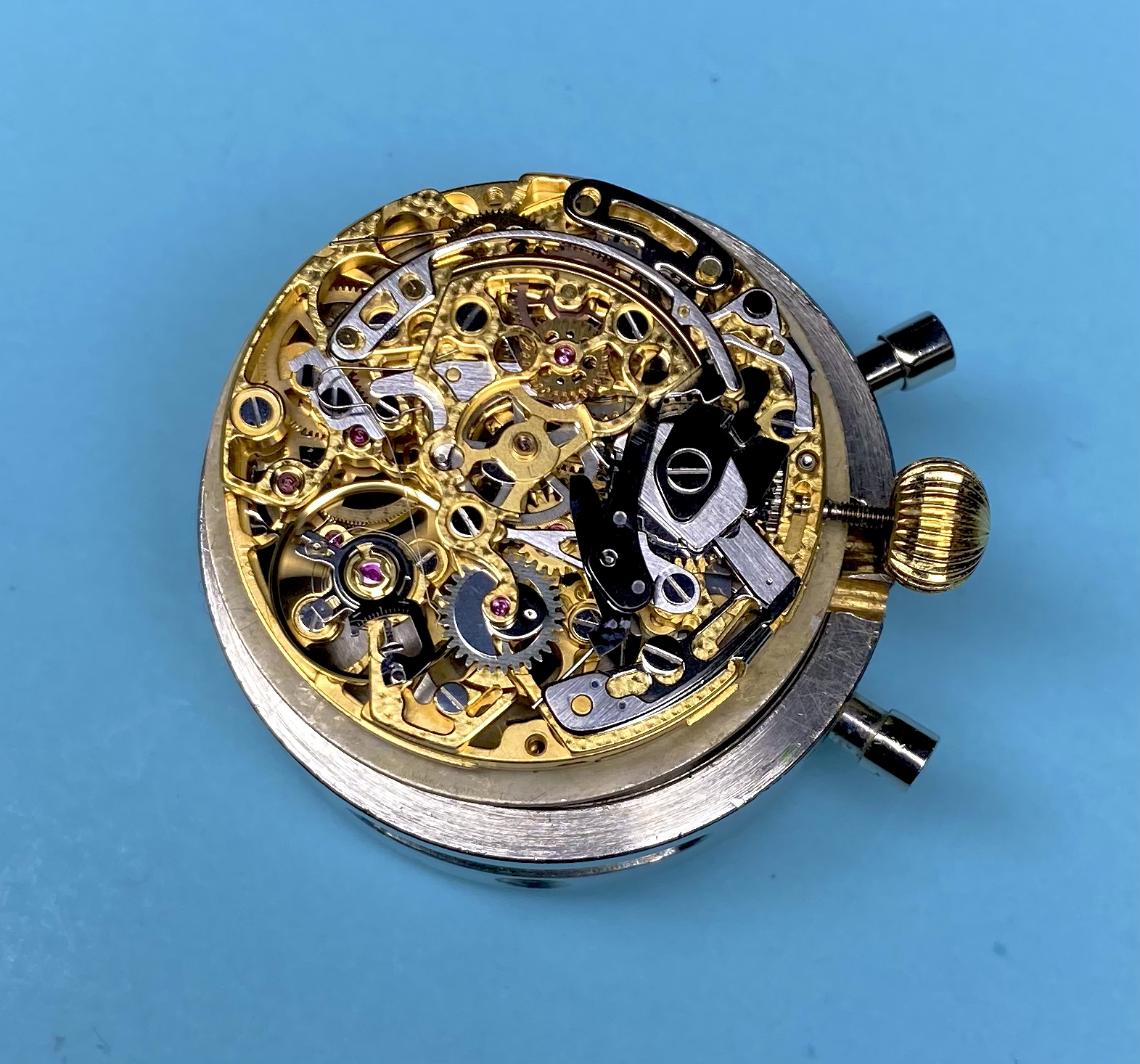 The watchmakers then proceed to the cleaning process. Our master watchmakers begin to service the movement. This is done by putting the components of the watch, such as the wheels and screws, through three different cleaning solutions. These solutions will remove broken parts, dried up oils oils, dirt, dust and other debris built up throughout the years within the movement.

Once all the parts are squeaky clean every part will be closely examined and replaced if needed. The movement is then re-lubricated and adjusted part by part and reassembled.

The watch will then be put together in its beautifully polished case and bracelet. It will go through thorough testing to make sure the watch is water-resistance and has an accurate amplitude. We do this by using special computers and tools.

A watch service process takes between 3-6 weeks, depending on the complexity and damage of the watch. During these weeks they are put on a winding wheel which simulates the wrist motion.

Our watch specialists go through the serviced watch daily, checking its automatic self-winding mechanism. They also control the power reserve and manual winding function. Finally, the Chronoswiss watch goes through a last quality control to ensure it goes back to your wrist like the day you purchased it.

Your watch will then have our 12 month Gray and Sons warranty (24 months for Rolex).

There are a few steps you should take as the care for you timepiece - especially after your watch repair:

Unique services at Gray and Sons

At Gray and Sons we offer a personalized service. If requested by the client, we will send pictures before, during, and after your watch repair. Nobody in the world does it, but we do!