La Generale Watch Co was founded in 1848 in the town of Bienne/Biel, Switzerland. Formally incorporating the name omega in 1903, Omega is now owned by Swatch Group. In the late 1910’s Great Britain and the United States chose Omega as their official timekeeper for their respective Combat units, Marking the first of Omega’s crowning achievements to come. They have also been the official timekeeper of the Olympic games since 1932. In 1969 Omega was honored in becoming the first watch on the moon, a true example of it’s mechanical performance. Omega has been a mainstay in pop-culture for decades, From President JFK to James Bond, George Clooney to Buzz Aldrin. Omega is one of the most recognizable and paramount brands in any collection. If you are a modern watch lover, you know and likely cherish at least one model from this influential brand.

Gray & Sons Jewelers specializes in Omega watch repair. Omega watches contain dozens of tiny moving parts all working in synchronicity to keep and display the proper time. When one of those parts isn’t working properly it can throw off the whole system. Diagnosing and repairing your watch properly should only be handled by a certified master watchmaker like the watchmakers at Gray & Sons with factory trained Omega Co-Axial specialists. Omega watches also require periodic cleaning and an overhaul of the movement to make sure that they watch lasts for decades to come (it is recommended that mechanical watches have a complete overhaul service every 3 to 5 years). Gray & Sons guarantees each Omega repair with our exclusive one-year warranty. We know that we have the best watchmakers, the right tools and equipment, and the customer service that an owner of a fine watch like Omega deserves. So if you want to have a watch that has been to the moon, on the wrist of James Bond, and continues to be the official timekeeper of the Olympics, then an Omega watch (in proper working order) is the watch for you!

Gray & Sons Jewelers is an independent watch service center in the Miami area. Our Swiss-trained Omega certified watchmakers do Omega watch repair and polishing using original Omega tools, parts, and equipment. Gray & Sons Jewelers can adjust and size your original bracelet by adding or removing Omega links to correctly fit your wrist. We can also polish and clean your watch so that it looks as close to new as possible.

We have seven Swiss-trained Master Watchmakers and Jewelers with over 150 years combined experience to perform all Omega repair services, including:

Every one of our Omega watches we take in has been meticulously restored to perfection by our Omega repair specialists, to ensure years of faithful service with normal care and maintenance. First, each Omega watch goes through our rigorous 86-step inspection and restoration process. We are so confident in the quality of the timepieces we sell that we proudly offer our exclusive 12-month warranty on all watches. After being fully restored, all Omega watch cases and bracelets are finely polished to remove any surface scratches and to restore each piece to its original luster. When the Omega watch leaves Gray & Sons (whether the watch is 5, 10, 20 or even 50 years old) it is in pristine condition. 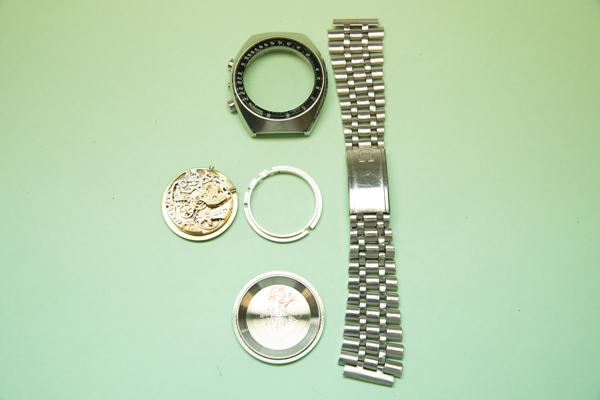 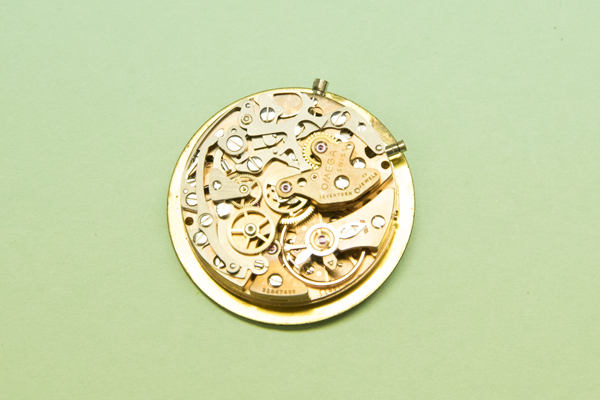 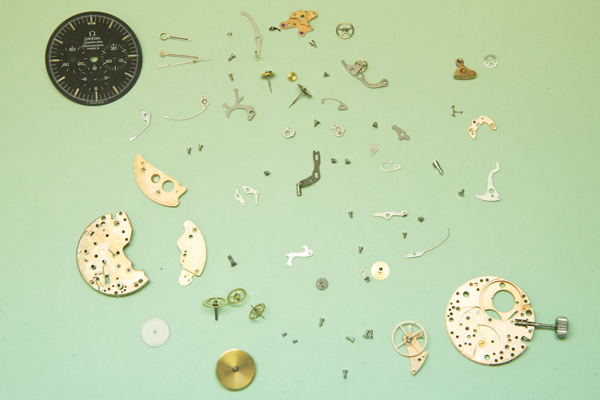 We have your vintage Omega Speedmaster watch. We are doing an overhaul without detailing in order to keep it's original vintage look. We will completely disassemble your watch and put it through a cleaning machine in 3 different solutions to wash away all the dirt and old oils. We then re-assemble your watch piece-by-piece, wheel-by-wheel, screw-by-screw, and apply 4 different synthetic oils.

Just keeping you updated on the status of your watches.

Wishing you the best. 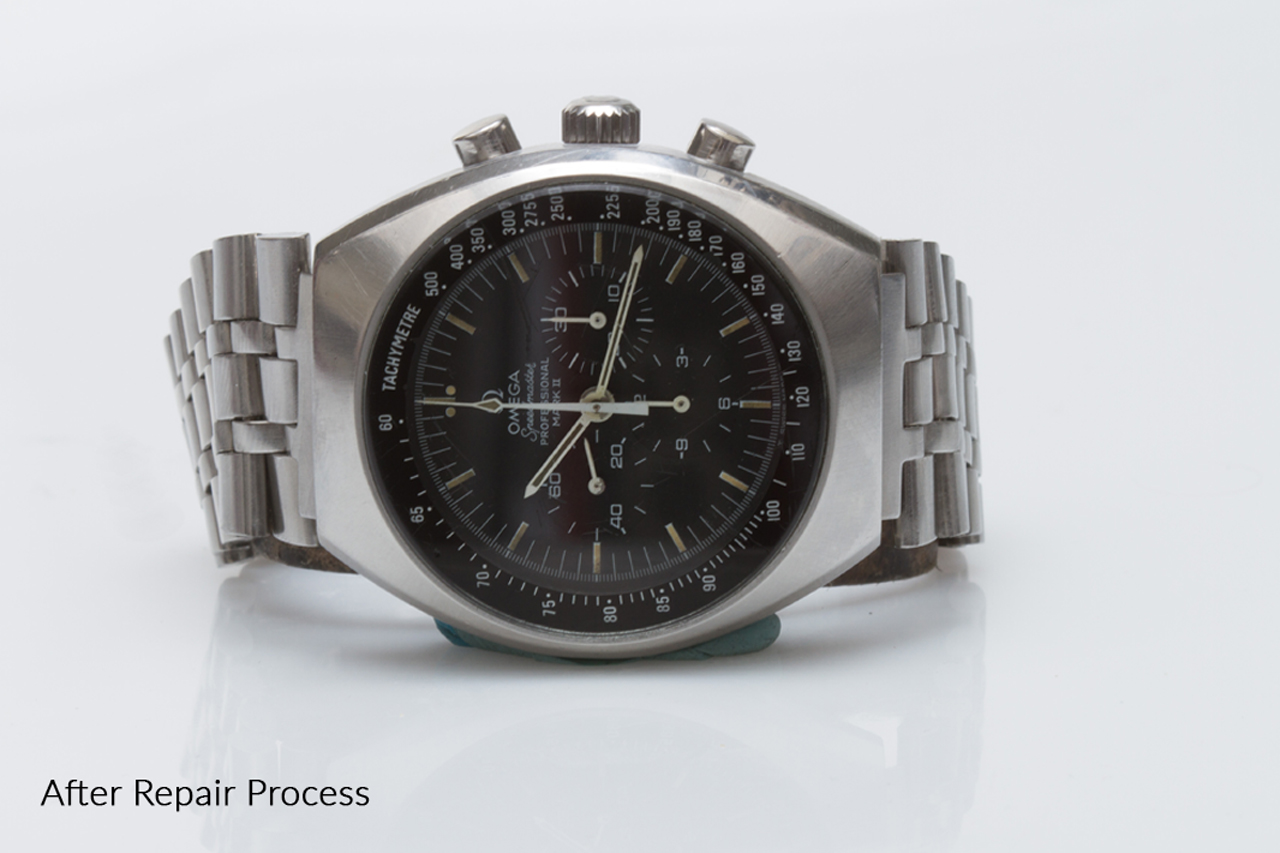 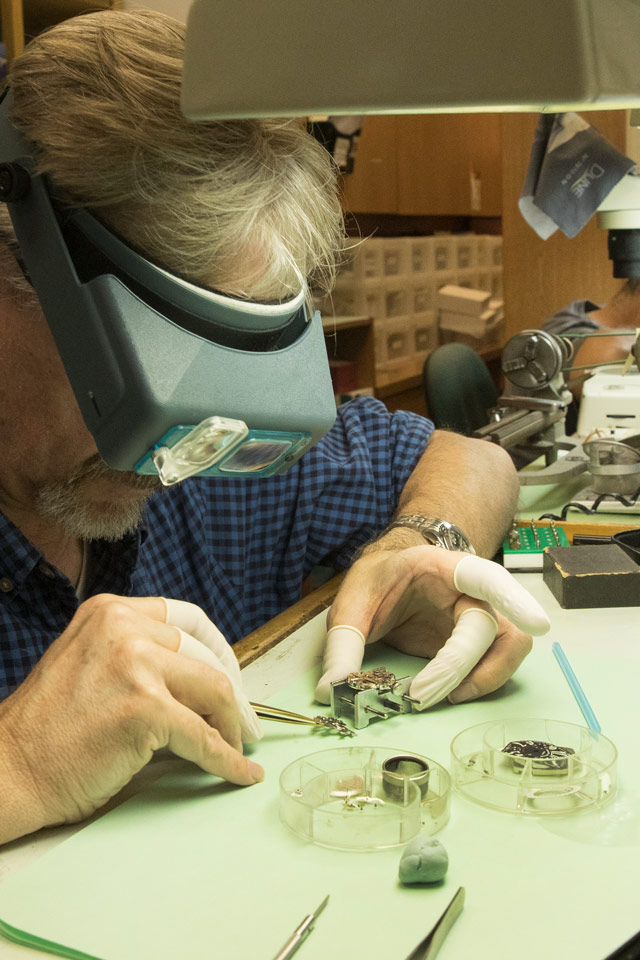 OVER 150 YEARS OF COMBINED WATCHMAKING & JEWELRY/CASE AND BRACELET REPAIR EXPERIENCE!

How to Repair Your Watch with Gray & Sons

Come visit our showroom and let us evaluate your watch. Our Swiss-trained watchmakers are among the best in the United States and we just happen to be located on Miami Beach. We will provide you an estimate before beginning any work.

To accommodate customers across the United States who complete repairs with us, we devised the Easy Ship Box as the fastest and most convenient way to send sensitive luxury items.

Omega Speedmaster Professional Review- the First Watch on the Moon